I started losing my voice even before I was old enough to find it.

Little kids are known for blurting out truths that most adults are too polite to say. “Mommy! That man has a HUGE nose!” my son once boldly stated in the grocery store. Everyone turned to look at my adorable three year old, then at the object of his attention, then a few turned back to look at me to see what kind of woman had raised such a rude little boy. Hello. It’s me.  His intention wasn’t to be rude, he was too young for that. He was just stating the obvious, the truth. The man DID, in fact, have a HUGE nose. I’m not sure that I’ve ever seen one bigger.

At a Christmas party, years ago, a little girl went up to a woman there and asked her, “Why are you so fat?” Again, a very bold question asked without hesitation, and really, without judgement. She was just curious. The woman WAS very fat. She was actually obese and later went on to have gastric bypass. The woman, who had had a lifetime of judgements issues against her because of her size, simply stated that, “God made me that way,” and the little girl seemed to be satisfied with the answer and moved on.

When we are young and figuring out the world and how we fit into it, we notice things, we are curious about things and we ask or make statements about things that are not always appropriate for public consumption. When we are teaching our kids that all questions are good questions, we can’t very well nail them to a wall when they ask one. Those awkward moments that kids give us, create the opportunities to have conversations about feelings and being kind, outward differences and inside similarities. It is in this way that most of us learn when to say what we think when it’s appropriate, and when to hold our tongue and keep the words inside.

When I think back to my childhood, the first time I can remember being told what I can or can’t say was when I was three. My dad had told my sister and I that he was going to marry ‘a new mommy’ for us. I was too young to know what the heck he was talking about. What’s a mommy? I hadn’t ever had one and wasn’t wise to the ways of relationships yet, so I had absolutely zero context to put that statement in. My sister, who was six, seemed excited, so I guess I was probably excited because of her reaction, but really, I didn’t have a clue what was going on.

Shortly after the wedding, when my dad wasn’t around, my step mom said to us, “I am not your mommy. I don’t want to be your mom and don’t you call me mom!”  I still was too young to really get what she was saying, but I remember being scared because she was so angry and I remember being even more scared because she had upset my sister, so I knew it was serious. That is how I ended up with a ‘Ruth’, instead of a mom. It took a couple of years, until I started school and started noticing that all the other kids had a ‘mom’ that brought them to school, or showed up during Christmas shows, that I realized that I didn’t have what everyone else had. I still didn’t really get it or know why. I just had a ‘Ruth’ and they all had a ‘mom’, but that day when I was three, was the day I started losing my voice.

From then on, I learned very quickly to use my words as little as possible when I was home. Being invisible was the best policy and if I couldn’t be invisible, very very quiet was the next best option. I learned what I could and couldn’t say to other people that would focus my step mom’s anger at me, learned that ‘if you tell, you will get it’.  I got very good at not telling. Not telling anything. The good, the bad or the ugly.

I got a globe for my birthday when I was in the fourth grade. It was my sole birthday gift from my dad. He had bought it at Target, where he was a manager. When he gave it to me, I didn’t know what to say. A globe? Why would I want a globe? I’m nine. While I was turning the globe over in my hands, trying to think about what to say about this gift that I didn’t know what to do with, I noticed that my dad had forgotten to take the price tag off the bottom of it. ‘Clearance $0.99’ it stated boldly on an orange sticker. Well, THAT certainly elicited some thought. My dad had just bought me a birthday gift that I didn’t want and didn’t know what the heck to do with that was priced at ninety-nine cents. Of course the $0.99 price was BEFORe his 10% employee discount.

The thoughts you might be thinking right now? Yes, they were all floating around my head, along with a few other ones. What came out of my mouth? “Thank you! I can use it for school!” Pathetic, right? It’s not that I was trying to think of something kind to say so that I wouldn’t hurt his feelings. I really wasn’t thinking about that at all. I just wanted for him to love me, and I knew saying what I was thinking wasn’t going to accomplish that, so I stuffed it deep and said something more pleasing. Something that sounded nice. Something that was not true. 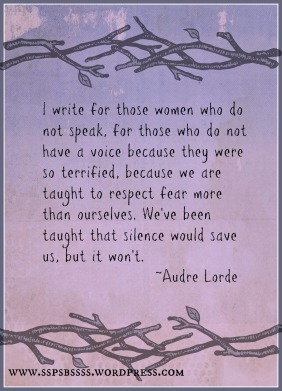 A childhood full of these learned behaviors has created in me, an adult who has a really, really difficult time saying what is true, if I feel like it will hurt or upset someone that I love. Don’t get me wrong. I can speak forty kinds of truth to someone that I am not close to. My dad has quit calling me because I don’t let him live in la-la land. I call him on his crap now, every. single. time.  No problem with that. I have had fierce conversations with biological family members of my youngest daughter, laying it all out and telling them how things are going to have to be if they want contact with her. No problem with that. Most people that know me, would never believe that I have a hard time with words, because I don’t. Unless I love you. Unless I care about our relationship deeply. Unless I think that what I have to say will be unpleasing and make you love me less. What a hot mess, to be trying to find my voice at 42 years of age.

Back in June when we had our Storyline book club finale, we had a woman come to the house and lead a mediation for us.  I usually don’t do great with meditating because I can’t get into the hoo-doo voo-doo, overly spiritual-ness of the way many people meditate. This woman was not like that, so I was glad. I don’t know if I could have kept from rolling my eyes.

AnyWHO, as she was working through the meditation, she was going through the chakras. When she got to the throat chakra, and she had us meditating on it, I felt this big egg-like shape stuck in my throat. It felt like I was choking on it, it was so large. After the meditation was over, I asked about this feeling that I was still having in my throat, and she told me that I should ‘explore’ that. That I clearly have something going on there in the communication chakra that needs attention.  Well, sh*t. Tell me something I don’t already know.  Take your cute little meditation pillow and hit the road lady.

Undoing nearly forty years of learned behavior is not easy. It is not comfortable and it is not enjoyable. I think I’ve made progress, but it’s been in baby steps, with a couple of million miles to go. Will I ever be able to just ‘say it’? Well, let’s hope I can continue on the path that direction, but on the bright side, I’ll likely never be the old lady with no filter either.

6 thoughts on “Finding My Voice”